As a vocal coach at her studio, Performance High Voice and Music Studio, she excels in bringing a technical approach to contemporary vocal instruction. She has been teaching voice since 2009 and is accredited as a teacher of Mix Singing through the International Voice Teachers of Mix (IVTOM).  Adrienne is also IVTOM’s Manager of Technology.

Adrienne believes in building a large vocal skills toolbox. Once singers can learn to use their voices without thinking about technique, they can use it to express themselves artistically and honestly. 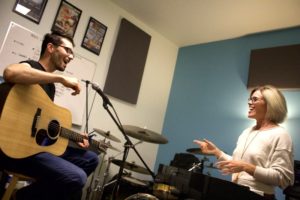 Her vocal clients include other vocal coaches, lead singers in local bands, touring musicians, adults returning to singing after a long break, and teens who write songs or perform in their school musicals.

As a bassist, Adrienne focuses on pocket over flash, and always looks to serve the song above all else.  She has played for rock, pop, and pop-jazz artists such as Melissa Ivey, Pamela Machala, and Cody Qualls and sometimes performs on bass in her studio’s professional backing band at student showcases. She was also the bassist and lead vocalist for dance band Urban Dance Theory and for her own band, Adrienne O.

As an artist, she has released three EPs of original electronic pop music, one of which she produced, and has original music placed in various film and TV series, such as Rosewood (Fox) and feature-length film A Remarkable Life. She now performs as Stevie Nicks in the Petty Nicks Experience, playing both locally and nationally at theaters and festivals, and in 2022 started to write original music again for her project, Adrienne O.

In a previous life, Adrienne graduated from Stanford University with a B.S. in Computer Science. She worked as a software and database developer, and later a project manager, for dot-com startups and B2B tech companies for a decade before switching careers into music. She was also a national champion waterskier and still holds an 18-year-old women’s slalom record in the Western Region.

She lives in Denver with her musician boyfriend Justin, who plays guitar in many of the same bands, and a cat named Shanti who loves to nuzzle bass strings.

Past Bands and Performances